“Do I keep running and try to win the race or do I turn around and help this little dog?” ~ Dion Leonard

“They said to me she’d been sitting in that heat all day looking at the horizon waiting for me.” ~ Dion Leonard

When Dion Leonard lined up at the start of the Gobi March last June, he was there to win.

The gruelling ultramarathon takes racers across the Gobi Desert in Asia in extreme heat. The runners carry their own food and water on the six-stage race, which has competitors running about 40 kilometres each day with the final leg being twice that far.

After the first day of the race, Leonard noticed a little dog begging from the racers around the campfire.

The next morning Leonard sees the dog again. This time she’s hanging around the start line.

When he got to the finish line that day, people were cheering. But he quickly realized that they were cheering for the dog running right behind him.

“That’s when the bond started to form. She came into the tent with me and I started giving her food because obviously she didn’t have any of her own,” says Leonard.

Again the next day, the dog follows Leonard on his race, but she really tested him when they came to a deep river crossing. Leonard was halfway across with the rushing water up to his chest when he heard her.

“She’s yelling and barking and squealing and yelping and it was the most horrific noise that I’d ever heard and it made me stop in my tracks,” he recalls.

“I turned around and realized that she wasn’t going to be able to cross the river without my help. I had a decision to make there — do I keep running and try to win the race or do I turn around and help this little dog?”

He turned around and carried her across the river. Leonard says his own abusive and volatile upbringing made him feel the dog’s pain at that very moment.

“She has this grin on her face when she’s running. She’s just so happy to be next to me that it made me realize there was more to life than the race and more to life than all the past demons inside of me,” says Leonard.

The next stages were too hot for Gobi to run — Leonard was sure she would die if she tried — so he arranged to have her transported to the next rest stop by car. One of the days was particularly hot, over 50 degrees, and he’d rescued one runner who collapsed, and later collapsed himself from the heat.

But there was Gobi waiting for him at the finish line.
“She just came running out. They said to me she’d been sitting in that heat all day looking at the horizon waiting for me,” he says.

“It made me cry. I’d been through so much that day with the race, and then to see her cemented the bond even more.”

Leonard ended up finishing second in the Gobi March, but his journey with Gobi the dog wasn’t finished… 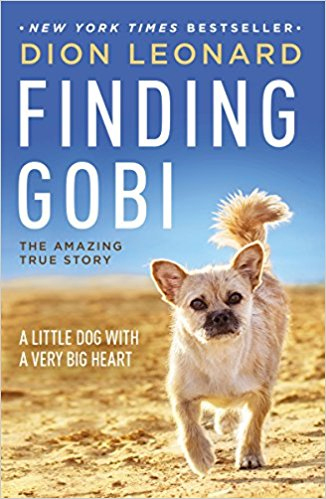